Dr.Yan Solihin is a Charles N. Millican Chair Professor of Computer Science at University of Central Florida and Director of Cybersecurity and Privacy Cluster. He is well known for pioneering cache sharing fairness and Quality of Service (QoS), and inventing efficient counter mode memory encryption, and Bonsai Merkle Tree, which have significantly influenced Intel Cache Allocation Technology and Secure Guard eXtension (SGX). In 2017, he received IEEE Fellow “for contributions to shared cache hierarchies and secure processors”. He is in the HPCA Hall of Fame and ISCA Hall of Fame. He has received MICRO Best Paper Runner Up Award, and several best paper nominations (HPCA, IPDPS, ISPASS). He served as NSF Program Director from 10/2015-1/2018.

Dr. David Mohaisen is a Professor of Computer Science at the University of Central Florida. Prior to joining Central Florida, he held various positions in academia and industry. At UCF, he runs the Security and Analytics Lab (SEAL), where his research interests are broadly in the area of computer security and online privacy with applications to DDoS, malware analysis and detection, blockchain systems, adversarial and applied machine learning, and emerging networking technologies. His work is supported by NSF, NRF (through the Global Research Lab initiative), AFRL, and FC2, among others. He is an associate editor of IEEE Transactions on Mobile Computing and a senior member of ACM and IEEE.

Dr. Leavens Gary Leavens is a professor and chair of the department of Computer Science at UCF. After joining UCF in August 2007, he became associate chair in 2008, and was appointed chair in 2010. He led a successful faculty cluster proposal in cyber security and privacy. His research is in formal methods.

Previously Dr. Leavens was a professor of Computer Science at Iowa State University in Ames, Iowa, where he started in 1989, after receiving his doctorate from MIT. Before graduate studies at MIT, he worked at Bell Telephone Laboratories in Denver Colorado as a member of technical staff.

Dr. Cliff Zou is a Professor of Computer Science at University of Central Florida. He received his PhD degree from Department of Electrical & Computer Engineering, University of Massachusetts at Amherst, in 2005, and MS and BS degree from University of Science & Technology of China in 1999 and 1996, respectively. Currently he is an Associate Professor in Department of Computer Science and the Program Coordinator of Digital Forensics Master program in University of Central Florida. His research interests focus on cybersecurity and computer networking. He has published more than 80 peer-reviewed research papers, and has obtained more than 5800 Google Scholar Citations. He is a Senior Member of the IEEE.

Dr. Paul Gazzillo is an Assistant Professor of Computer Science at University of Central Florida. He received his PhD from NYU and previously worked as a Post-Doc at Yale and a Research Scholar at Stevens Institute. His research aims to make it easier to develop safe and secure software, and it spans programming languages, security, software engineering, and systems. Projects include analysis of configurable systems, side-channel attack detection, and concurrent smart contracts. His work has been published in venues such as PLDI, ESEC/FSE, and PODC and has been recognized with a SIGPLAN Research Highlight.

Dr. Yao Li is an Assistant Professor in the School of Modeling, Simulation and Training (SMST) at University of Central Florida. She received her PhD in Information and Computer Sciences from University of California, Irvine in 2019. Her research lies at the intersection of privacy and Human-Computer Interaction (HCI). Specifically, she studies the influence of cultural and social factors on users’ privacy management. Her research aims to make privacy designs better to support users’ privacy and security in the use of technologies. Her work has been published in venues such as CSCW, CHI, TOCHI, PoPets and JASIST. 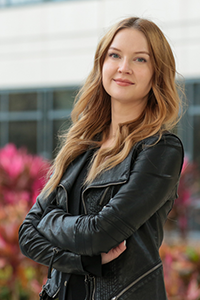 Dr. Mary Jean Amon is an Assistant Professor in the School of Modeling, Simulation and Training (SMST) at University of Central Florida. She hold an M.A. and Ph.D. in Experimental Psychology from the University of Cincinnati, as well as an M.A. in Psychology in Education from Teacher’s College, Columbia University. Before joining UCF, she was also a Postdoctoral Researcher in the Department of Psychological and Brain Sciences at Indiana University Bloomington, as well as a Research Associate in the Institute of Cognitive Science at the University of Colorado Boulder.

Dr. Mary Jean Amon is an Assistant Professor of Global Health Management and Informatics at UCF’s College of Community Innovation and Education. He received a doctorate in health services research, policy and administration at the University of Minnesota School of Public Health and recently completed a postdoctoral fellowship at Vanderbilt’s Owen Graduate School of Management exploring the U.S. healthcare system through economics and data. Dr. Choi is currently investigating the impact of health data breaches on hospitals and patients.